New Delhi: Twitter co-founder has finally broken his silence on the layoffs at the company, apologising to the staff on Saturday. A day after Twitter’s new owner Elon Musk laid off nearly 50 per cent of the total 7,500 people workforce, Dorsey has said that he owns the responsibility for “why everyone is in this situation”.

Dorsey believes that the reason why everyone at Twitter is in this situation is because he grew the company at a rapid speed. The 45-year-old co-founded the microblogging site in 2006 and ended his formal affiliation with Twitter in May this year when he quit the Twitter board. 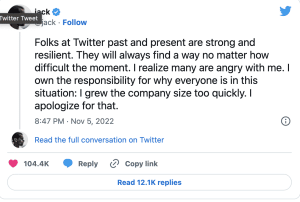 Last year in November, Dorsey had picked Indian techie Parag Agrawal for the job of Twitter CEO. However, Agrawal was also sacked by the world’s richest man Musk last week when he took over the platform.

Finally, speaking on the Twitter layoffs, which have affected the employees globally including in India, Dorsey said, “I realize many are angry with me. I own the responsibility for why everyone is in this situation: I grew the company size too quickly. I apologize for that.”

He noted that the folks at Twitter past and present are strong and resilient. They will always find a way no matter how difficult the moment. “I am grateful for, and love, everyone who has ever worked on Twitter. I don’t expect that to be mutual in this moment…or ever…and I understand,” Dorsey added.

In April this year, when the Tesla boss had first announced his bid to acquire the platform, Dorsey had said, “In principle, I don’t believe anyone should own or run Twitter. It wants to be a public good at a protocol level, not a company. Solving for the problem of it being a company however, Elon is the singular solution I trust. I trust his mission to extend the light of consciousness.”

“Elon’s goal of creating a platform that is “maximally trusted and broadly inclusive” is the right one. This is also @paraga’s goal, and why I chose him” were the Twitter co-founder’s words then.